Goal: To make sure your child’s hard work and achievements get the validation they deserve.

Instructions:
1. Once your child has started developing in areas of leadership, service entrepreneurship, performance, art, writing, research, scholarships, or academic competition or scholarship, discuss ways that achievements can be used to:
• Raise awareness for a worthy cause
• Build community
• Inspire or educate others

2. Explore avenues for achievements to get profiled, reviewed, or published through print, television, online media, or social media.

3. If your child gains recognition at the local level for good work, scale the recognition upwards to the state, regional, national, and even international level.

You can find this exercise on p. 59 in BRAND U: 4 Steps To The College of Your Dreams. It is important for students and parents of college-bound students to embrace a growth mindset in order to gain a better college match, win admission and merit awards, and get set up to thrive in college and their chosen careers.

Decisions about where to go are not always wise: 1 in 3 students transfer, only half finish in 4 years. University counselor/student ratios are 300:1 at public schools and 200:1 at private schools.

Among the roughly 1.7 million students applying to four-year universities, the top 20% apply to roughly the same 50 to 60 universities, overcrowding these admission pools.

Along with university choice, paying for tuition and making sure students find meaningful work are also concerns that parents share.

My book, BRAND U – 4 Steps to the College of Your Dreams, helps parents and students like those at your school set up a strategy to understand their personal journey through life and how college can be a tool to help them get where they are going.

Download your free copy here >  BRAND U – 4 Steps to the College of Your Dreams.

The book presents my unique method in 4 steps that parents and students can easily follow:

In today’s highly competitive admissions environment, the normal admissions approach just isn’t enough. David takes a open mindset approach, putting students and their families—not the colleges!—in control of their personal growth as a part of the admissions process. By attending David’s presentation, you will learn everything you need to know about 1) selecting the right school; 2), getting admitted; and 3), paying for college the smart way.

About David Montesano
David Montesano is a leading global educational consultant and the founder of College Match U.S. The first admissions strategist in the United States, David has 20 years of experience helping students select and get in to the college of their dreams. 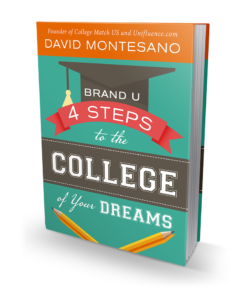 rior to launching College Match in 2001, David worked with noted admissions expert Loren Pope. David has recently discussed an open mindset for college admissions as a panelist with Open Mindset author and Stanford University Professor Carol Dweck.
David is the author of two books—“Brand U: 4 Steps to the College of Your Dreams” and “Stand Out to Get In!”—in which he details his Montesano Method for college admissions. The Montesano Method is also available in a six-part video course available at Unifluence.com.
For more information about David’s admissions strategies, and to work with David, please visit www.collegematchus.com.
http://www.collegematchus.com/success.shtml College Match is the leading provider of strategic advising for college and graduate school bound students.